Burkina Faso is a poor, land-locked West African country, with about 18.5 million people, a number that is increasing fast at 3.1% per year. Categorised as a Least Developed Country (LDC), Burkina Faso regularly ranks at the bottom end of the Human Development Index (183 in 2015). Poverty is mostly rural (50.7% rural poor compared with 19.9% urban poor). Food insecurity and malnutrition remain a chronic concern (Global Acute Malnutrition = 8.6%). 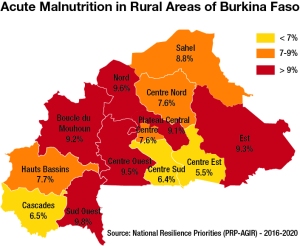 Despite the large number of people living in poverty and the fact that the people of Burkina Faso are among the most vulnerable in the world, they also are very resilient. The Burkinabe ability to adjust and cope with shocks (climate-related, social or political) is outstanding. Indeed, Burkina Faso (and many West African countries) would be an interesting case for the OECD Better Life Index, which measures people’s well-being and societal progress.

It is not by chance that Burkina Faso is today among the most advanced countries in the implementation of the Global Alliance for Resilience (AGIR) – Sahel and West Africa, a multi-stakeholder alliance aimed at eradicating hunger and malnutrition within the next 20 years. It was launched almost four years ago in Burkina Faso’s capital city of Ouagadougou.

Following a process of inclusive dialogue that involved all stakeholders across various policy sectors, the government of Burkina Faso approved its “National Resilience Priorities” (NRP-AGIR) in March 2016. Structured around the four pillars of AGIR, it identifies 13 key priorities to build resilience in the country. The priorities target about 10 million people and expect to reach more than half of those people within the next five years. The government already has secured nearly half of the budget, but is still raising the other half.

How much progress has been made in implementing AGIR in Burkina Faso?

I recently accompanied a West African television team to observe the state of AGIR implementation in Burkina Faso on the ground. Some of the findings were presented in an edition of the Wari magazine on TV5 Monde. It illustrates that resilience building is nothing new and that many resilience projects already are being implemented.

Many stakeholders, particularly civil society representatives, still perceive AGIR as a “traditional” programme – with a budget line and a programme cycle. However, AGIR acts as a unifying framework for resilience-building activities and helps create synergy among the various initiatives that encourage resilience in the region. The fact that a large number of activities have already been implemented in Burkina Faso perfectly illustrates AGIR’s role. The four pillars of AGIR allow stakeholders to structure both government and partner actions around a common results framework. The NRPs identify the useful activities of existing programmes and policies. They intend to offer a new reading of how collective action can support the most vulnerable populations. The mapping of existing programmes and initiatives helps establish prioritiy actions that could best contribute to AGIR’s resilience-building goals. It also helps identify overlaps and gaps and thus allows stakeholders to better target their activities. Who can deny the usefulness of such a tool for national and regional policymakers?

The NRP-AGIR document is part of a dialogue — the first step of a process that must be pursued over the long term to ensure that all stakeholders feel like they are an essential part of the process. The next step consists of translating national priorities at the local and intra-national levels, says Amadou Hebie, Programme Officer for Rural Development and Environment at the European Delegation in Burkina Faso.

“AGIR priorities must be owned by institutional actors such as local administrations, technical services, as well as private sector actors or civil society representatives, including NGOs working on humanitarian assistance, development or infrastructure projects. Their actions must all ultimately contribute to our common goal of ending hunger,” he says. Other partners call for moves at the national level. “We are asking for strong national leadership because AGIR should not become an instrument of partners, but an instrument of the Burkinabe people,” says Mr. Yves Delisle, Programme Officer for Rural Development for the Austrian Co-operation Office. “The government has an important role to play!”

Many development partners still are taking a “wait and see” approach; they don’t know how much emphasis the government intends to place on the implementation of resilience priorities.

Some partners explicitly aligned their country-specific programming with AGIR priorities, acknowledging the usefulness of the NRP document. For example, USAID’s four major programmes in Burkina Faso fully take AGIR pillars 2, 3 and 4 into account. In the near future, USAID is considering launching a new activity in support of social protection for the most vulnerable households (in line with pillar 1). “We hope that the Burkinabe government will soon elaborate a roadmap involving all relevant ministries (including health and education sectors) in order to boost the implementation of NRPs and strengthen the multi-sectoral approach. We will certainly adhere to it and align our actions,” says Jim Parys, the USAID representative in Burkina Faso. “Even before AGIR, we already had a lot of good efforts in support of resilience but we clearly lacked co-ordination. Now we are doing better, but we can still improve,” he adds. Similarly, Austria has aligned its four areas of intervention with the four AGIR pillars and is now directly contributing to the implementation of the NRP-AGIR in Burkina Faso. The partners and their positive examples must be followed by other organisations. Nonetheless, some major resilience initiatives still are being formulated without referring to AGIR and without looking out for overlaps with the programmes of other major development partners. “I think this is above all a communication challenge,” says Mr. Delisle. “There are development partners who are not sufficiently informed about the NRP-AGIR. How can they take into account AGIR priorities if they are not familiar with them?” Beyond communications, this is a clear leadership challenge for the Burkinabe government which is working towards strengthening its co-ordination capacities to make sure that all partners row in the same direction.

Agricultural producers’ organisations, government representatives and development partners alike highlight the importance of capitalising on the NRP-AGIR process to make sure that resilience priorities will be integrated into the second generation of National Agricultural Investment Plans (NAIPs) and into the Regional Agricultural Investment Programme (RAIP). The process was kicked off by ECOWAS and its partners in Abidjan in June 2016. AGIR priorities already have been recognised as a major tool to strengthen the resilience of vulnerable populations within these new programmes. This exercise is generally seen as an opportunity to develop synergy between resilience actions, improve co-ordination and strengthen the multi-sectoral approach. The fact that resilience priorities will be integrated into the new NAIPs can already be considered as a key achievement of AGIR.

Moving beyond talk and sharing experiences

Burkina Faso is set to advance its resilience agenda. As illustrated in the Wari magazine, many priorities from the NRP-AGIR already are being translated on the ground. The Senior Experts Group meeting in December in Abuja will certainly provide an opportunity for the Burkinabe government to report on its progress and announce its next steps. It is important to capitalise on the country’s best practices in building resilience so that stakeholders can identify opportunities to scale up their activities. Despite the challenges, Burkina Faso already has many positive lessons to share.

Towards a Better Understanding of the Global Alliance for Resilience (AGIR), December 2016, OECD Development Matters