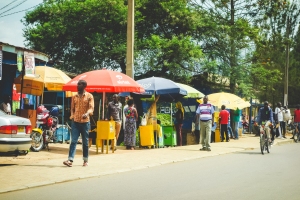 The conversation needs to change when it comes to migration and Africa, replacing the narrative about an exodus out of the continent to one about people moving to other countries within the continent. The difference matters.

In its most recent round of surveys in nine African countries, the Afrobarometer revealed that 64% of Africans do not wish to emigrate. Of the remaining 37% who have considered leaving their countries, almost half would like to relocate to another country in their immediate region (37%) or to other parts of Africa (10%). Only 20% would consider Europe as a destination should they actually emigrate. Others opt for North America and Asia.

The survey results confirm the reality on the ground: Most Africans indeed migrate within their region and the continent. According to data from the United Nations, it is more often the case that migrants, both economic and humanitarian, remain in their immediate region (see graph). 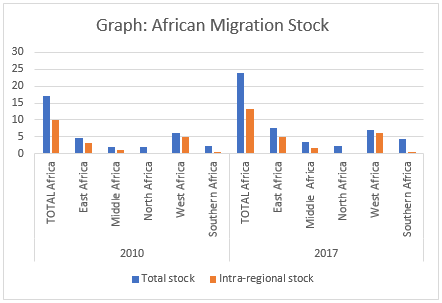 Source: DESA dataset, 2018. Note that the regional categories are not in line with the AU’s Regional Economic Communities but the DESA migration stock classifications.

The data from different sources provide further insights into the motives of emigrants when leaving their country. The Afrobarometer surveys indicate that the top three motives are economic: finding work (43%), escaping economic hardship (33%) and seeking better business prospects (7%). The overwhelming majority of respondents are aged 18-55. A 2017 UNICEF and International Organisation for Migration (IOM) survey that focused on minors aged 14-17 also confirmed the desire to migrate for economic reasons. Indeed, labour migration within Africa is not uncommon, be it in the mining sector in Southern and West Africa, in construction and agriculture in North Africa, or in the services sector across the continent.

So how are we responding to the desire of Africans with respect to labour migration within the continent?

The good news is that some regions within Africa have advanced considerably in promoting regional labour markets and protecting the rights of migrant workers. The Economic Community of West African States (ECOWAS), for example, is relatively advanced thanks to its Protocol Relating to Free Movement of Persons, Residence and Establishment (1979). The first two phases of the protocol (free movement and the right of residence) are fully in force, therefore allowing nationals to move in the region and seek employment freely. The East African Community (EAC) Common Market Protocol, which entered into force in 2010, also provides for free movement up to six months and the right of residence. Other regions on the continent, such as the Maghreb, provide for the right of movement and residence to nationals for a maximum period of three months. This, however, does not extend to all countries, such as Egypt. And the Southern African Economic Community (SADC) lags behind with member states opting to sign bilateral rather than regional agreements to regulate labour movements.

Labour movement is key to integration. A study just released by the African Union Commission and the IOM, to which the Maendeleo Group contributed, notes that amongst the benefits of free movement are:

The integration cases of the European Union as well as Southeast Asia confirm such benefits.

But labour migration remains a difficult discussion in a context where unemployment in developing economies remains high, including in Africa. The perception is strongly entrenched amongst the population as well as policy makers that immigrants threaten jobs and increase the strain on the job market.

Although evidence about the impact of migration on labour markets of developing countries – especially when such migratory flows originate from other developing countries – remains limited, some studies indicate that the concerns raised above, at least concerning employment – may not be nuanced nor contextualised. A 2013 study focusing on South-South migration into South Africa, for instance, showed that while immigration had a “negative and significant effect on natives’ employment rates”, with highly skilled and white South Africans affected, immigration did not have a negative impact on natives’ employment when viewed more globally at the national level. Immigration did, however, have “a negative and significant” impact on the total income of natives.

A more recent June 2018 study published by the OECD’s Development Centre on Côte d’Ivoire’s job market concluded that immigration had negative impacts neither on employment of natives nor on their income. Most migrants in Côte d’Ivoire are from West Africa and are generally less educated than Ivorians. Another study focusing on Ghana confirms that “the presence of foreign-born workers does not have a significant effect [on unemployment] at either the national or the sub-national level” nor does it affect the quality of employment as measured by pay. However, the impact on the informal sector, which is a key sector on the continent, may be more difficult to measure.

Concerns about the negative impact of free movement therefore need to be tempered and contextualised to reap free movement’s benefits. It is no accident that the Protocol to the African Union’s Agreement Establishing the African Continental Free Trade Area (AfCFTA) was launched concurrently with the Protocol to the Treaty Establishing the African Economic Community Relating to Free Movement of Persons, Right of Residence and Right of Establishment in March 2018. The AfCFTA, a key trade and economic integration tool for Africa, recognises the importance of labour movement as it advocates for the right of residence of people (art. 1.i.ii), and the concurrent protocol itself supports enabling factors to facilitate such movement. It would indeed be difficult to see free trade in the region without free movement.

But the challenge of deviation in the current international climate is significant. Even for regions where such rights have been granted (e.g. ECOWAS), it would be important to ensure that the conversation remains on free movement to promote development and not succumb to pressure to restrain movement to curb it, especially North-bound movement to cross the Mediterranean. As the conversation often focuses on the horrendous journeys of migrants crossing the Mediterranean, the bigger story and potential long-term impact worth remembering could be in promoting intra-regional movement of labour accompanied by economic development within Africa.