Skip to content
HomeWho will drive consumer spending in the next decade? 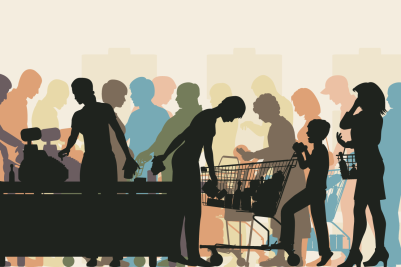 In October 2018, the international community crossed a historic threshold: the majority of humanity no longer lives in or near poverty. Now and continuing into the foreseeable future, most people on Earth are middle class or rich. This tipping point is of interest to both the research community as well as global and regional companies searching for new markets.

But who exactly are these new middle-class consumers, and how will their profile change over the next decade?

While acknowledging that these classifications do not have a precise definition that can be applied globally, with many contextual aspects that vary between countries, they are useful in identifying the market size of different groups. The global economy is driven by demand from the two middle-class groups and the “rich.” Each has certain distinguishing characteristics.

Generally speaking, those in the lower middle class have some discretionary income that can be used to buy practical consumer durables like motorcycles, refrigerators or washing machines. The upper middle class spends more on leisure, entertainment and a range of services, often paying for quality and for differentiated products that suit their specific tastes. The rich are able to afford luxury goods and services and are less sensitive to price and budget constraint issues.

First, we are only beginning to see the global middle-class revolution. Today, an estimated 3.6 billion people are in the global middle class, accounting for half of the world if you add the 200 million rich people. These three consumer classes combined are adding some 150 million people each year. Looking forward to 2030, the middle class will dominate the global economy, accounting for two-thirds of the world’s population (5.7 billion).

Second, the Asian middle-class tipping point is another milestone just over the horizon. Half of the world’s middle and upper class will be Asian by next year already. By 2030, two-thirds of all middle-class spending power will be concentrated in Asia.

To paint a broader picture of the middle class and rich markets in 2030, we developed Market Pro; a forward-looking income and demographic model that covers all income groups and demographic segments in almost every country on the planet.2

We looked for where markets could exceed USD 1 trillion in annual consumer spending power. We found eleven of these in specific countries. We believe these eleven will constitute the global economy’s “centre of gravity” in the 21st century.

The biggest consumer spending will occur at opposite geographic and economic poles. The lower middle class will fuel Asia’s spending power, accounting for more than USD 20 trillion in consumer spending in India, China and Indonesia alone. By contrast, the rich in the United States (but perhaps not the US middle class), with more than USD 10 trillion in annual spending power, will continue to have a dominant role on the world stage.

The future of the global consumer class
2030 consumer spending projections: top 11 markets above one trillion 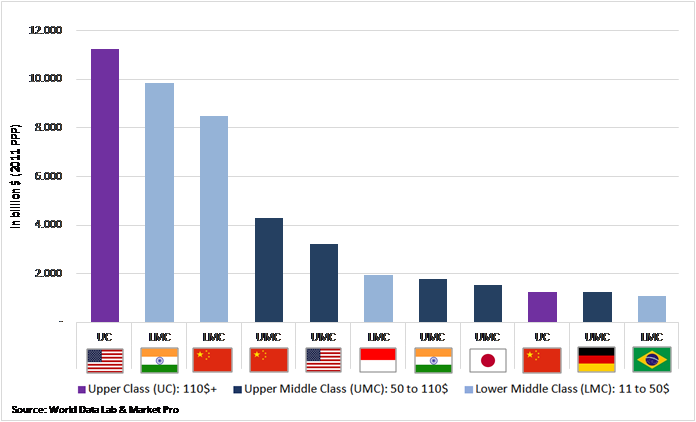 What are the implications of these patterns? For global and regional businesses catering to the “average family”, servicing the needs and preferences of Chinese, Indian and Indonesian consumers will become a, if not the, core consideration. While the American middle-class ethos largely shaped the industries of the last century, in the coming century, the next Disney, McDonald’s and Walmart will almost certainly have Asian origins. The newest innovations (think personalised medicine) and extreme luxury brands and services would be wise to redouble their efforts to build affinity with Americans. Many of America’s GenXers and millennials will grow up to become some of the world’s richest people. Ultimately, understanding the differences in spending power today will lead to markedly differentiated strategies for marketing, branding and designing products in the decade ahead.

Email Kristofer Hamel at kristofer.hamel@worlddata.io for questions regarding the data models or methodologies presented in this blog.

1 We thank Wolfgang Fengler for inputs. His talk at the Singularity Summit in August 2018 presented the Global Income tipping point for the first time. Andreas Birnstingl and Martin Hofer provided research assistance.

2 Market Pro was developed by World Data Lab. The tool estimates the current income distribution of each country and includes demographic and economic projections (short and long term), adjusted for PPP. Together with a unique algorithm, it creates a dynamic platform estimating income segments across time and space. The current version also includes age and gender breakdowns for each income segment for more than 100 countries. Early in 2019, the platform will also add sub-national estimates for most OECD countries.

6 thoughts on “Who will drive consumer spending in the next decade?”